The very start of Future Echoes reminded me that how an archive is organised, strongly influences and delimits how I can approach it. Initially, NSU’s archive material itself reflects (and once produced) how NSU organised its work. When such material is admitted into a public archive, the archive institution imposes organising principles on it that might have little to do with the nature of material itself.

The complexity of the interrelations of these layers appear already when the digital database of the Danish National Archives, Daisy, responds to my search “Nordisk sommeruniversitet” with two separate archive creators.

Initially I am thrilled, as the first refers to a «Kvindehistorisk samling» (Collection of female history) and a NSU study circle from 1972-73 about the role of the family in a capitalist society (as many academic environments in Scandinavia in this period, NSU had several explicitly Marxist fractions). The material in question was donated to Kvindehistorisk samling by an individual NSU participant independently of the rest of the NSU archive, hence the two entries. A further complication is that the material is located in Viborg in Jylland, some 300 km northwest of Copenhagen.

The second entry, labelled «Nordisk Sommeruniversitet», reveals 13 archive series loosely distinguished by type of material and year(s) of origin. The type categories are a blurry mix of NSU’s own (board, study circles, sessions) and archival metalanguage such as»Emnespecifikke sager» (say, subject-specific issues). Each of the 13 series contain packages.

I later realise that «package» refers to the brown cardboard boxes in which material is archived. Packages can be ordered by email and will subsequently be made available for physical browsing in a reading room at an archive of the reader’s choice. To confirm the order of a package can take up to 2 weeks.

My idea for Future Echoes springs from that as a participant of NSU, I know that study circles of NSU have been, and still are, important to the development of academic and artistic feminist thought. I live neither in Copenhagen nor Viborg. I was planning to work in the reading room of the Danish National Archives in Copenhagen for some days on my way home to Oslo from arranging a writing workshop in Berlin. Apart from the package in Viborg, which other packages may contain material relevant to Future Echoes?

I turn to the Sessions series in the database, hoping for a chronological overview of NSU’s summer and winter gatherings. The database is organised per year. However not all years, and thus not all sessions, are visible. Upon arrival in Copenhagen I discover how the physical archiving constrains the digital in a fascinating and intuitively unnecessary way: The years and sessions visible in the database are decided by the size of the archival content and the volume capacity of the brown cardboard boxes. Whenever a cardboard box contains material dating from more than two separate NSU sessions, only the first and last year/session have been entered in the database.

Maybe the Study Circles series is a better bet? In real life, the Study Circles are the hearts of NSU, they are where exchange and work happens. I’m hoping for more info on the study circle from 1972-73 referred to in Kvindehistorisk samling, to decide whether I should order it from, alternatively travel to, Viborg. But there, the digital information has dissolved into years and numbers only.

I end up filling out order forms based on the serendipital strains of information I can draw from Daisy: The material from Kvindehistorisk samling, «Emnespecifikke sager», the Sessions package and some info about the Study Circles.

Future Echoes is now in Iceland

The project Future Echoes initiates a chain of letters between female writers living and working in the Nordic countries today. The project aims to include as many Nordic languages as possible. 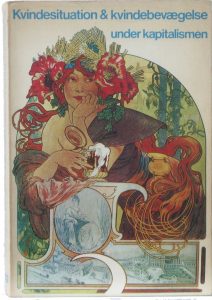 The publication Kvindesituation & kvindebevægelse under kapitalismen (GMT 1974) («Female situation(s) and female movement(s) during capitalism»)  will form the point of departure for Future Echoes. I read the first edition of this book at the Danish National Archive in Copenhagen, after having located it in the archive’s department in Viborg. The first version was the result of the very first collaboration between feminist movements from all the Nordic countries, starting in NSU’s sommer session in Finland 1971. It was published in two editions with different content: first in a photocopied version in NSU’s series of writings in 1973, which sold out, then in a reworked version by GMT Forlag 1974. See more about the two under Literature.

I work as an artist, writer and musicologist. Many of my artistic projects have explored libraries and archives as public spaces as well as principles for how the content of a library changes over time. I studied art and public spaces at the Oslo National Academy of the Arts, musicology in Oslo, creative writing in Bergen and Tromsø, and performative criticism in Stockholm.